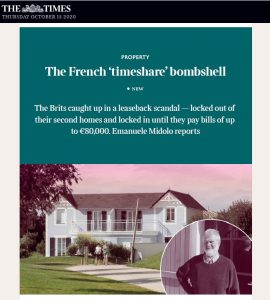 The Times reporter Emanuele Midolo reported on Friday on the continuing French Leaseback issues. He reported on the treatment of owners by Madame Vacances (owner Eurogroup).

In June this year Madame Vacances owner Eurogroup, based in Chambéry, sent letters to all owners who had bookings between July and August. Due to Covid-19 the company claimed extraordinary circumstance (or force majeure ), cancelling all owners’ holidays and renting out the houses instead in order to raise money.

Owners tell how when they showed up to use their property for their holidays they found the locks had been changed and they were not ‘allowed’ in to their own house. At least not without paying a full tourist rental rate.

They describe how their lease stated that no ‘eviction payment’ would be demanded by the operator in order to exit the lease. However, as Irish and UK leaseback owners have discovered to their financial and personal detriment, eviction compensation can always be demanded under French Commercial Lease law. Of course these properties were marketed at consumers, not real-estate professionals. Therein lies the trap.

As one owner says:

We feel it’s their property and we’re just paying for it..

A French legal company, Goethe Avocats, which specialises in leaseback problems (or ‘nightmares’ as many owners would have it) and represents around 7,000 clients explains that:

.. under French law these contracts cannot be terminated without paying a fee— not even after the contract with the leaseback operator expires.

The same firm contributed recently to a documentary on the subject made for RTE called Burnt by the Sun.

About 100 owners at the site mentioned in the article are now suing Eurogroup in order to exit their contracts without ‘indemnité d’éviction’ and for damages for lost holidays.

Good luck to them !

Read the full article here.  It will be published in the print edition of The Sunday Times (UK edition) on 18th October 2020.

Read more about the DGCCRF investigation into French Leaseback issues.

Richard Green, the manager of Madame Vacances (Eurogroup), also featured in the Victoria Derbyshire program on French Leaseback in Sept 2017.

It seems little has changed…

One thought on ““French ‘Timeshare’ Bombshell” says The Times”

This website uses cookies to improve your experience while you navigate through the website. Out of these, the cookies that are categorized as necessary are stored on your browser as they are essential for the working of basic functionalities of the website. We also use third-party cookies that help us analyze and understand how you use this website. These cookies will be stored in your browser only with your consent. You also have the option to opt-out of these cookies. But opting out of some of these cookies may affect your browsing experience.
Necessary Always Enabled
Necessary cookies are absolutely essential for the website to function properly. This category only includes cookies that ensures basic functionalities and security features of the website. These cookies do not store any personal information.
Non-necessary
Any cookies that may not be particularly necessary for the website to function and is used specifically to collect user personal data via analytics, ads, other embedded contents are termed as non-necessary cookies. It is mandatory to procure user consent prior to running these cookies on your website.
SAVE & ACCEPT